Star Trek Gets a 50th Anniversary Nod From Hot Wheels

“Space:  The Final Frontier.  These are the Voyages of the Starship Enterprise.  Its five-year mission:  To explore strange, new worlds.  To seek out new life; and new civilizations.  To boldly go where no man has gone before.”

And, so goes William Shatner’s voice-over intro to “Star Trek: The Original Series,” or TOS for short.  Gene Roddenberry’s creation ran from 1967 to 1969, and was canceled after 79 episodes.  The abysmal Nielsen ratings were the cause of the show’s demise, indicating that, simply, very few people were watching the show.  I don’t have to tell you the rest of the story; even the most casual Sci-Fi fan knows that it was a major hit during its re-run era, spawning off movie after movie, and several new, re-imagined TV series like “Star Trek: The Next Generation (TNG),” “Deep Space Nine (DS9)” and more.  A truly big hitter in the space TV show era, it paved the way for other hits to flourish, such as “Battlestar Galactica” and “Buck Rodgers in the 25th Century.” Even George Lucas can give a nod to the show for helping “Star Wars: A New Hope” become such a mega-hit, because there was already an established audience.  Even as I write this, a new Star Trek TV series is set to hit the airwaves in January of 2017.  Nicholas Meyer, who wrote/directed in “The Wrath of Khan,” “The Voyage Home,” and “The Undiscovered Country” Star Trek films has signed on to co-create and produce the upcoming series.  There may be no end in sight to the Star Trek phenomenon.

An admission:  I’m a fan of almost all of the aforementioned shows/movies.  It took me a few years to get into TNG, as the writing during the early years was “blah” at best.  But, it did improve…tremendously.  The episodes that featured the Borg were some of the absolute best-written, emotion-driven storylines ever.  DS9 on the other hand?  Never liked it.  From the pilot episode on, I just couldn’t get into it.  But, as a kid, I truly enjoyed Battlestar Galactica and Buck Rodgers (even though the storylines for Buck Rodgers could sometimes border on the ridiculous side of things.  But, hey…it had Erin Gray, AKA Col. Wilma Dearring and Pamela Hensley, AKA Princess Ardala in it, which made the show worth watching in itself!)  Heck, even before those shows, I got into “Space: 1999,” which was a truly underrated show for its time, as well as the “Thunderbirds.”

Anyway, in homage to all that “Star Trek” has accomplished, Mattel decided to do a tribute to the shows by first introducing the U.S.S. Enterprise into the Mainline a few years ago.  These were insanely tough to find in the early days, but they became more available, once the hype wore off.  Then, there was a dedicated line of diecast ships which sold moderately well.  Finally, in 2014, a 6-car set was released in the “Pop Culture” line.  These were good sellers right off the bat, but…many ended up being peg warmers in the end.  The card art was cartoon-ish, as was the deco on the cars themselves.  The castings weren’t very inspiring, either.  The gem of the bunch for many was Uhura’s Jeep Wagoneer.

Now, in 2016, Mattel presents us with another “Star Trek” subset in the Pop Culture line. I think they definitely got it right this time.  The card art is absolutely fantastic…some of the best yet, IMO.  And, the set is a nod to the 50th Anniversary of the show.  The castings improved as well, with the coveted T1 Panel Bus and desirable Deco Delivery and Quick D’Livery models in the lineup.  In a nutshell, this is a really nice set, with the minor exception of the graphics.  They’re cool, but suffer from that dot-matrix-y problem that has plagued the Pop Culture line over the years.

Still…definitely a set worthy of a Star Trek fan.  They should be in a galaxy near you soon, if they’re not already.  Happy 50th, Star Trek!  And may Scottie, Dr. McCoy and Spock all rest in peace… 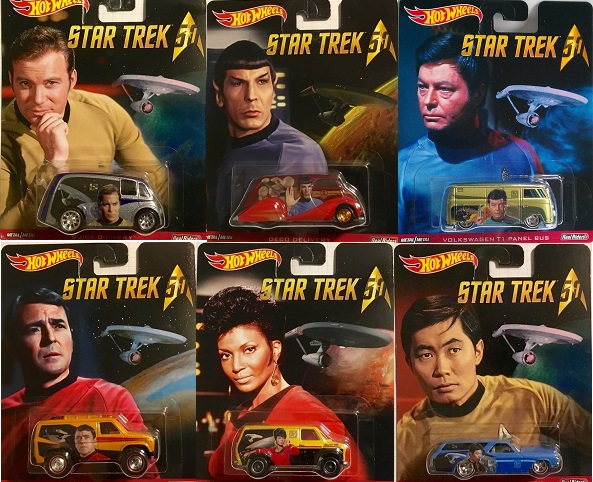