Thinking back to the late-80′s and early 90′s, there are quite a few cars that could easily be classified as “ahead of their time.” The 1990 Nissan 300Z comes to mind, along with the Delorean DMC-12. I still see some of these on the road, and, with some slight obvious exceptions, both look like they could still be somewhat newly-released.  The designs are both retro and modern, all at the same time.  That was the beauty of some of those early models.  But, another model comes to mind, even more so than the aforementioned:  The 1990 Acura (or Honda, as it was back in the day) NSX.  Mattel nailed this one as a New Model for 2015; the details are fairly accurate, and the stance is almost exact. As a Hot Wheels model, it was released in red, then white.  Following that was a Spectraflame blue Treasure Hunt issue for 2016, along with a blue counterpart in the Mainline.  If some styling aspects remind you of a jet fighter aircraft, it’s not accidental, because the NSX team turned to the General Dynamics F-16 Falcon for inspiration.

So, what makes the 1:1 ’90 Acura NSX tick?  Here are the basic stats:  Its mid-mounted 3 liter V-6 engine is a naturally aspirated, double overhead camshaft, 6 cylinder unit that produces 270 HP at 7300 rpm.  A 5 speed manual gearbox delivers the power to the wheels.  Top speed was around 168 MPH.  A curb weight of 3009 lbs ensured the power plant was more than capable of providing an interesting thrill ride, with a 0-60 time of 5 seconds.  By the way, “NSX” stands for ”New”, “Sportscar” “eXperimental,” if you weren’t already aware.

In the end, the Hot Wheels rendition seems fairly faithful to the original, although it looks to me like the height of the HW version is slightly exaggerated.  For most of us, that’s as close as we’ll get to a real one, since a 1990 NSX in very good condition sells in the 42K to 79K range, depending on the mileage.  Another thing to keep in mind:  Repairs on the older NSX’s are somewhere in the Earth’s stratosphere.  If I fork out that much for a car, I’ll buy a new one!  In the meantime, I think I’ll stick to the 1/64 version! 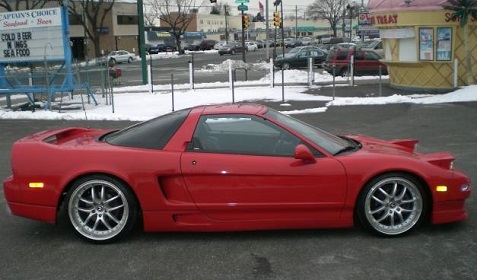 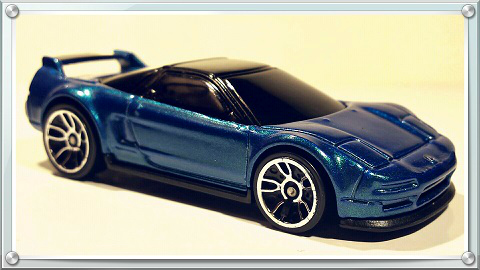 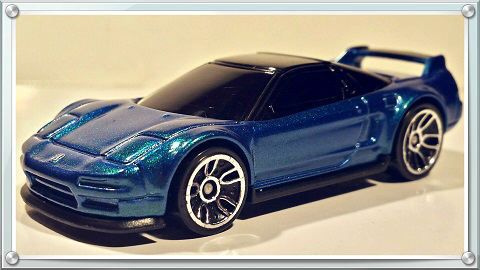 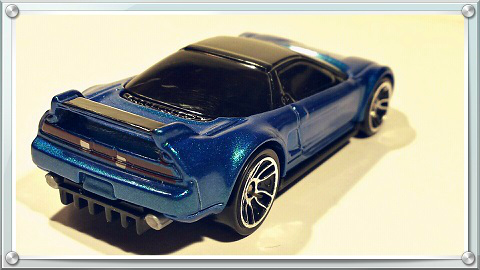