pro·to·type ˈprōdəˌtīp/ noun:   ”A first, typical or preliminary model of something, from which other forms are developed or copied.”

If you’re any kind of a regular on eBay searching for Hot Wheels, you’ve most likely come across an “Ultra-Rare, Un-spun Prototype!”  The un-spun thing runs rampant across eBay, and guess what?  It’s making money.  Lots of money.  Throwing that “prototype” word in the auction verbiage apparently causes oddities collectors to whip out their PayPal accounts in record time.  What’s the common theme of all these auctions? Look where most of them are originating:  Maylaysia.  Yup, our friendly sellers in Malaysia love to help out U.S. collectors by providing us with exciting and “rare” Hot Wheels that are one-of-a-kind.

While it’s been an ongoing thing for quite a few years, we saw it amplified in last year’s Super Treasure Hunt Lancer Evolution.  This version had a ZAMAC body versus the standard black body, as well as Redline Real Riders versus Blackwall Real Riders.  I won’t even tell you what the thing went for, but it was well over $200.00.  Insane.

So, was this a prototype?  Nope.  It was a one-time knock-off that most definitely originated from the Mattel factory, but likely by a line employee who got creative, made the changes, took it home and put it on eBay.  Here’s a tip:  Mattel isn’t going to stop the manufacturing line just to make a few one-offs, then continue on.  Keep this in mind as you’re bidding on these “rare variations.”

Another popular “proto” is a wheel change.  Oh, yeah…since that Porsche is sporting a mis-matched set of Pro Circuits and 5-Spoke Mags, it’s definitely gotta be a rare prototype, right?  Unlikely.  This is one of the more popular scams.  It’s not difficult to do a wheel change without even drilling out the posts.  You’ll see many of these originating from Malaysia, but they’re being sold in the U.S. as well.

The next popular “prototype” available is the ever-present “un-spun.”  These are all over eBay, and you’ve likely seen them.  You know, the disassembled car with intact posts that haven’t been touched?  Yep, those.  Prototype?  NO!  At least, not by the standard definition of the word that I indicated at the beginning of this blog!  Any Malaysian line worker can snag a few models before they’re assembled and call them an un-spun prototype!  The word just doesn’t fit, folks!

Lastly, there’s the good ol’ variation wheel swap “prototype.”  That rare variation of wheels that no one else seems to have.  These are pretty common, and can command big bucks on the secondary.  Rare?  Sure.  From the Mattel factory?  Likely.  Made by a line worker, or swapped out by another collector?  Good possibility.

Ok, so this blog has been very negative toward the “rare prototype” segment of the Hot Wheels hobby.  I get it.  There are definitely legit prototypes out there, for sure!  But, you really have to do your homework to ensure you’re not getting hosed.  These things are bringing in a lot of money, and mostly to Malaysian sellers.  As long as collectors are snatching up these perceived “rare” cars, it’s a problem that won’t go away anytime soon.

I’m not downplaying protos completely.  But, you have to know the difference between what is essentially a common (and sometimes purposeful) error and a legitimate prototype.  Some indicators of real protos are blank bases, off-colors, resin models (obviously!) and more.  Don’t be afraid to ask questions, both to the seller and the Hot Wheels community. There are plenty of collectors to get differing opinions from!

Now, this….this is the epitome of a Hot Wheels prototype.  Not many were made, as the body was found to be too narrow for the track Superchargers.  So, the body was modified to incorporate side wells for the surfboards, giving something for the Superchargers to grab onto.  THAT’S a prototype!  ;) 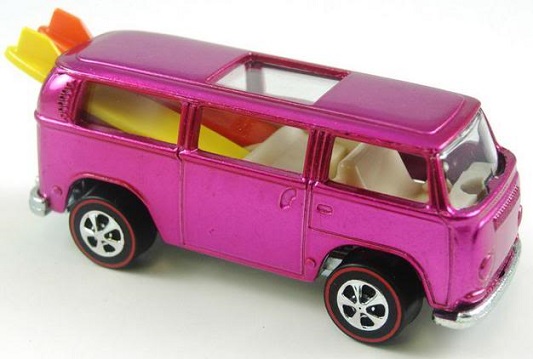 Got any prototypes in your collection?  Tell us about it by leaving a comment below!

One Response to Hot Wheels “Prototypes?”