Let’s take a trip back to the mid-70′s.  To Rhode Island, say…around Christmas time.  The winter is throwing everything it has at the hapless citizens of this New England state.  While we were waiting for the gale winds to die down (which would immediately lead to extreme sledding down the cemetery hill), we were pretty much relegated to staying inside.  Sure, we’d fight to go out, but our parents always gave us this look, as if

we were just absolutely stupid.  But, since it was Christmas Day, we were in no rush to meet up and show off our new stuff.  There was serious playing to be done.  I opened up one of the larger gifts, and found a new Hot Wheels Thundershift 500 racing set.  Now, up to this point, the only other Hot Wheels set I’d had was the Road King Mountain Mining set which, while cool, didn’t do much more than plod along with the yellow rig truck that came with it.  The artwork on the Thundershift set indicated that there might be some serious racing involved! (Although…I wish I still had that mining set; tough to find, now!)

I went downstairs and opened everything up, carefully laying out all of the pieces and decals.  Following the directions closely (at least as well as a kid seething with excitement, can, anyway).  After I got everything together, I sat back and admired my handiwork.  It looked like everything was in place.  I got to the most important part of the set (the cars!) and instantly loved the yellow Monte Carlo Stocker and the red Torino Stocker.  They looked like they were right off a real racing track, and I appreciated the details that were put into the racing tampos. 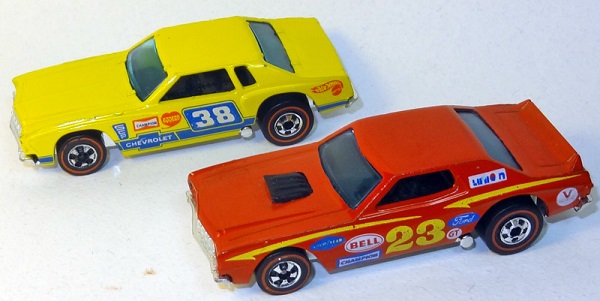 Now it was time to see if this thing actually worked.  I’d be lying if I said I hadn’t become completely frustrated with the set within the first 10 minutes or so.  You had to nail the timing of the car in order to keep it moving around the track, and the slightest error in judgment sent it flying into the clear protector above the launcher, halting your progress.  In all honesty, it was pissing me off because I wasn’t gifted with patience as a kid!  Another hazard was putting too much behind the shift when you did time it correctly, because you’d sent it flying off the track.

The shifters themselves had some friction to the pull, so it wasn’t a free-for-all with the process.  As the car would pass a point, you’d pull the shift back toward you to continue the lap.  If you timed it right, it was a thing of beauty.  Time it wrong, and *blam*….off the track.  After a bunch of practice, I got pretty good at it, and could keep my car lapping on a consistent basis.  My friends weren’t as good, so the schadenfreude was on, right from the start.  I was a vicious competitor.

With all that being said, I would rate the Thundershift 500 as one of the better 70′s Hot Wheels sets.  It was fun, competitive, pretty well-built, and a challenge to learn.  You could pick it up quickly, but mastering it took some time.  It was also a lot of fun trying out different Hot Wheels on the track, too.  Some worked really well…others, not so much.

Finding one on the secondary market today can be somewhat costly, although I’ve seen some real bargains over the years.  It just depends how many collectors are bidding against you, in the end.  But, if you’d like to find a decent, complete version, it’ll likely run you anywhere from $80.oo and up.  I’ve seen them go for more than $130.oo.  A lot of coin, for sure…but, it’d be worth it to relive the memories from those cold winters!

Got any fond memories of a favorite Hot Wheels track set?  Tell us about it by leaving a comment below!