So, after a few months of guessing when the next K*Days was going to be, it’s finally been confirmed for February 20th, 2016 @ 9:00 am.  Be sure to check with your local store to ensure they’re participating in it, or check the list of stores over at HWC.com.

To be quite honest, I don’t even know how any KMarts are still open; both KMart and Sears (who owns them), are doing so poorly that many of the stores have already shut down, or are in the process of doing so.  It’s not hard to see why; how many KMarts have you been in where the shelves were a mess, the merchandise was beat up, and there wasn’t an employee to be found anywhere?  Too many times that I can personally recall.  It’s a shame, because I have a lot of good memories of being dragged around KMart stores as a kid.  I’d disappear from my mom as soon as they’d put that “Blue Light Special” cart out. You know, the one with the flashing blue light on the pole?  Yup, that one.  That cart called to me like a mermaid to a sailor.  I’d grab the cart and run up and down the aisles with it, pretending to be a policeman.  With several KMart employees chasing me, not far behind. I got in more trouble in that place….

ANYWAY…I digress.  I’m not particularly stoked by these events, but I do attend them…just to mingle with local collectors and talk shop.  Over the past few years, the cars available for the mail-in promotion just haven’t caught my interest enough, so I haven’t been motivated to buy 20+ pegwarmers to justify it.  In the past, I’ve bought my 20, received a so-so promo, and gave them all away to kids on Halloween!  Not sure what I’d do with ‘em all, anyway.

Of course, the hot topic of these events usually revolves around Treasure Hunts.  From what I’ve seen, the Regular Treasure Hunts are often found in each individual case.  As they should, since many collectors now view them as nothing more than a glorified Mainline issue.  But, Super Treasure Hunts…well, that’s the draw.  Our local gathering in Raleigh, North Carolina has been pretty much shut out for Supers over the last couple of years.  Very few have been found in the cases.  I managed to snag two Hudson Hornet Supers during the last event, but those were the first ones I’d found in more than 2 years. Hopefully, the mixes are good for this time around.  We’ll see!

Most of us know what to expect at these events; you arrive before 9, get your ticket, and wait to be called up, if you’re fortunate enough to be picked.  Some of the inherent problems I’ve seen in the past?  The biggest one is Joe Collector, who brings his young kids, wife and parents to the event.  Now, before you crucify me for saying this, make no mistake:  I do realize these are toys and are meant for kids.  I have ZERO problem with involving kids or family members WHO ARE COLLECTORS.  But, when said relatives win a case and Joe Collector is the only one pawing through it while the kids are off and running around the store, well…yeah, that’s kinda crappy.  It’s all about the Super Treasure Hunt, in the end.

But, it is what it is.  As for this event, I’ll definitely buy my 20 cars, since the promo is the ever-luminous Blown Delivery.  I won’t double up and buy 40…I don’t need two of ‘em. Also, I’m stoked about the Sublime ’15 Dodge Challengers (all 4 KDays exclusives shown below) for two reasons:  1) I own a 1:1 version myself (red, not Sublime), and love the car!  2)  I need more Challengers for the NCHWA Club Car that I’ll be starting in the next month or two.

So saddle up on February 20th, bring the kids, grab your ticket and hope for the best! Take the hobby for what it is:  A fun pastime.  If you think your MOC common cars on the blister are going to put your kids through college when they’re ready, well…you might want to pick another investment, ‘cuz this one ‘aint gonna cut it.  Have fun, folks! 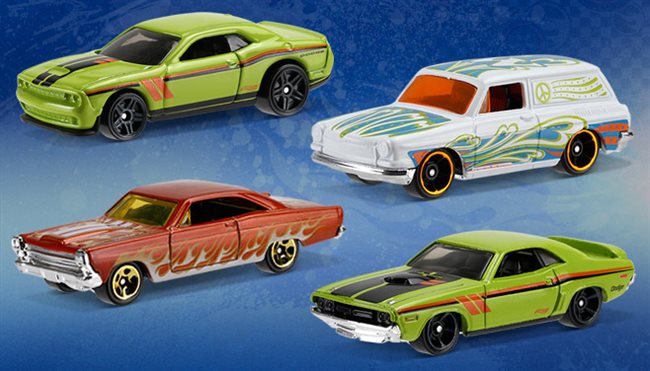 Have you had good/bad/indifferent experiences at KDays?  Tell us about it by leaving a comment below!