(Originally published on May 15, 2015)  In this blog, we’ll take a look at the mystery of the Cadbury Range Rovers, which tend to be among the most valuable Hot Wheels promos on the secondary market today! 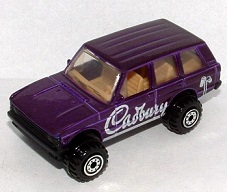 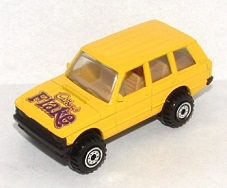 When you look at these Rovers, you don’t really see anything that stands out.  But, believe it or not, the purple version is currently exceeding $600.00 on eBay, while the yellow version recently sold for more than $1,100.00.  Seriously.  They sold for even more than that a few years ago.

So, what is it about these models that makes collectors break out their wallets in record amounts for a promo? The wheels? No Real Riders here…just plain ol’ Construction Tires. The deco? Hmmm…no. Simple “Cadbury” and “Cadbury Flakes” deco. Special paint? Again…nope. Metalflake purple and enamel yellow…what you see is what you get.

No, the REAL hype behind these two models is the accompanying myth. There is absolutely NO doubt that these are very, very rare…it’s rumored that less than 25 per model exist, although this has never been truly substantiated. Also, it seems that a few more show up as the years go by. But, the story behind the Rover is the main selling point. You’ll hear really some really interesting versions! One depicts the story of how the transport tanker shipping them to the Middle East sank around the same time Desert Storm was actively in progress, thereby dooming the ship’s cargo to include those precious Cadbury Range Rovers to the bottom of the ocean. However, try doing some research on cargo ships sinking in that area during that timeframe, and you’ll be hard-pressed to find even a tidbit of information that even remotely helps to support this story. True of False? You decide. It could have happened with very little fanfare, which makes it a difficult story to research accurately.

In a Hot Rod Magazine article over a decade ago, M. Strauss wrote the following excerpt on these mystery Rovers: “The Cadbury Range Rovers were produced in 1990 for Cadbury, a snack food company based in Great Britain for a 1991 giveaway promotion in the Middle East. The Range Rovers never arrived. The promotion was during the same timeframe as the Kuwaiti invasion and Operation Desert Storm – supposedly, something happened to destroy the shipment. It is easily assumed all were destroyed, but what really happened to the shipment of Rovers is unknown. Only 10 examples of each are known to have surfaced – some in Los Angeles – some in England.”

Obviously, more have surfaced since this article was written, but I think this is the best way to summarize this mystery. They were intended for delivery, and never made it, for “whatever reason.” That’s that. The fact of the matter remains: We may truly never know the true story of the Cadbury Range Rovers. In present times, more are being found in the Middle East and in Great Britain, so it stands to reason that if the original shipment was truly lost, it’s possible there were some left behind that WEREN’T shipped. This happens on a fairly regular basis, either through disqualification by Quality Assurance, employee cherry-picking at the factory, or some behind held for give-aways.

Regardless, if you want to add one, or both of these storied promos to your collection, you’ll need to be ready to fork over some serious disposable income! Good luck finding them.

One Response to A Sweet Mystery!